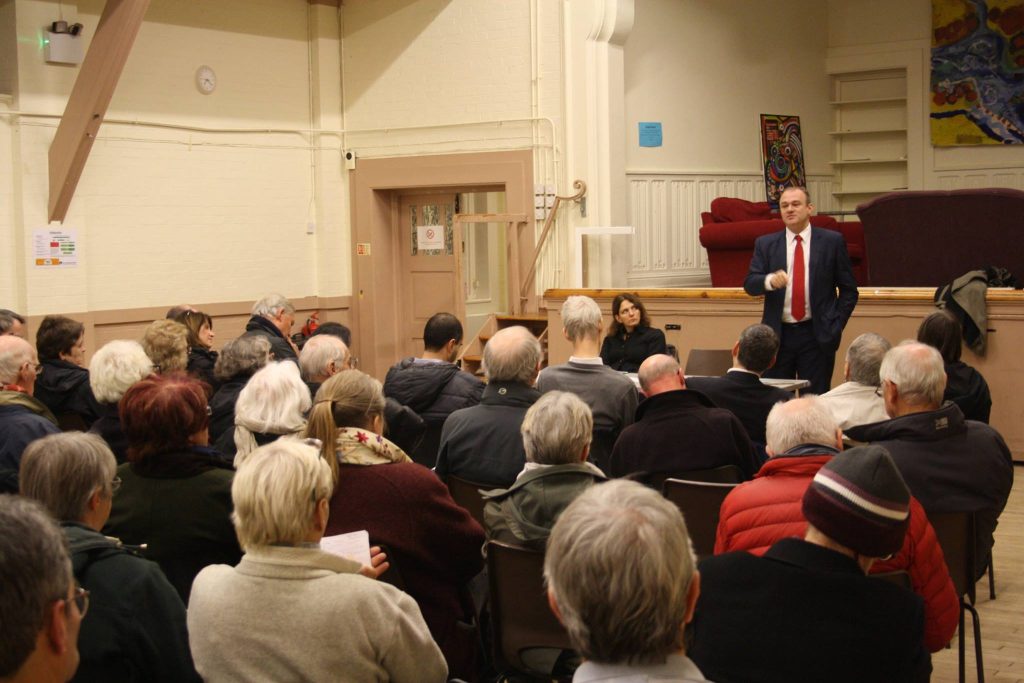 On 19th November 2014, Ed Davey MP, Minister for Energy and Climate Change came to Muswell Hill, to a public meeting arranged by Lynne Featherstone MP.  Below is a summary of the talk and questions that followed.  Based on notes by Cara Jenkinson, with gaps, I’m sure!

We now have more offshore wind than the rest of the world put together.

Over the last year alone solar power has increased by 60%, and we are now in the top 10 nations for solar, despite not having a particularly sunny climate!

Ed Davey’s view is that nuclear must be part of the mix, even though it is very expensive – nuclear decommissioning costs make up 2/3 of the DECC annual budget.  But currently 2/3 of our electricity is provided by coal and gas and it will take us around 30 years to move to renewables.  Also our electricity demand is expected to increase significantly as we electrify our transportation.  So nuclear has a place as a low carbon energy source.  The Energy Act will ensure that the costs of construction and decommissioning are factored into the future energy price, and importantly for the first time developers will carry the construction risks.

This is an essential part of any energy strategy.  The Green Deal has not worked as well as anticipated, though there have been 350,000 Green Deal assessments.  Although people have not taken up Green Deal finance around 70% of people who have had a GD assessment are undertaking energy efficiency improvements to their homes.  The energy company obligation (ECO) has been very successful with 1 million homes upgraded.

The UK produces 3% of global carbon emissions.  In Europe there are major challenges, particularly Eastern Europe, e.g Poland where the main energy source is coal.  Ed Davey established the Green Growth Group in Europe which agreed to cut emissions by 40% at the least by 2030.  The UK is currently the most ambitious in Europe in terms of cutting emissions.

Looking beyond Europe, Ed Davey thinks that it’s essential that we provide money to developing countries to allow them to develop in a low carbon way and adapt to climate change – in effect ‘buying their agreement’ to international commitments for carbon reduction.  Ed thinks this is money well worth spending (on 20 November, the day following Ed’s talk in Muswell Hill, the UK committed up to £720million into the Green Climate Fund for developing countries).

In terms of international climate talks we are in a much better place than we were in 2009.   Both Obama and Kerry are committed to addressing climate change, as witnessed by the recent announcement by the US and China on emission reductions.  Obama has been using the Clean Air Act 1990 to get climate regulations through thus bypassing Congress.

China’s position has also changed.  Ed’s view is that the Chinese Communist Party sees climate action as essential to keeping the Chinese population on board – there have been many objections to the current model of development which has resulted in huge amounts of pollution.  In India the new Prime Minister Modi is far more engaged on climate change, having done much to improve the energy sector in his home state of Gujerat before becoming Prime Minister.  So Ed has good hopes of a climate deal next year in Paris.

In the UK we have a big demand for gas; 70% of gas is used in heating.  It is going to take a long time to move the UK to heating powered by electricity.  So we need gas.  Currently a lot of this gas is imported, including in liquid form from Qatar.  Renewable alternatives such as biomass and heat pumps are now going to provide the gas we need, particularly in urban areas.  David Mackay, who was the Government’s Chief Climate Scientist till recently thinks that fracking would produce gas at a lower carbon cost than importing from Qatar.  The regulations that the UK is imposing around fracking, including regulations directed at minimising methane production will be far more robust than those in the US.  In terms of crowding out of renewables investment, Ed said that investment in fracking is dwarfed by the investment in traditional oil and gas, so did not have a significant crowding out effect.   As a side issue, Ed Davey thinks that a real option for renewable heat could be geothermal energy, which could use the same wells as fracking.

In terms of drilling under people’s land, fracking pipes will be far deeper than any current infrastructure eg.sewers.  Regulations around monitoring seismicity are very tough.

Yes, we can grow in a way that involves less carbon.  It would not be fair for developed countries to deny people in developing countries access to electricity, material goods etc that we have enjoyed for so long.  But in India for example much of additional electricity demand can be provided by solar renewable energy.  Furthermore natural resources can be used far more efficiently than they are today.  GDP is an inadequate measure that does not reflect ‘good growth’ – it needs to be modified.

Lib Dems have had many battles with Eric Pickles’ department over sustainability, eg. over zero carbon new homes.  However in terms of planning law, the new planning framework does state that development must be sustainable which should provide councils with the ammunition they need.

The Energy Act has gone some way to provide this, partly through the Contract for Difference instruments which will provide stable and predictable incentives for companies to invest in low carbon energy generation.  Investment in the low carbon sector is now £29 billion, with £7 billion invested in renewables (this has doubled in the last four years).

Whilst addressing inequality is important in its own right (and the Lib Dems have made some progress on this in Coalition eg through the pupil premium) it will not address climate change.    Low growth does not tend to produce happy societies – over history, and indeed recently, it results in the politics of division.  Making society more equal will most likely result in the poorer 50% consuming more, rather than the richer 50% consuming less.

Any attempt to introduce a carbon tax or price is always met by huge opposition by industry who say that government would be hobbling them against international competition.  A compromise has been the carbon floor price.  Also Ed Davey has been working hard to improve the European carbon trading scheme (EU ETS) which has failed in recent years as the carbon price has collapsed.  Ed Davey thinks there are good prospects for getting the scheme working again through ‘a market stability reserve’.